Fall is in the air, and Chuckanut Brewery is celebrating with a Harvest Fest on October 22nd, from noon to close.  With cool nights and balmy days, the tapping of Chuckanut Barrel Aged Stout at the Fest is a welcome addition to the Chuckanut beer lineup and part of the big celebration. This strong stout has been aged in Chuckanut’s next-door neighbor Westland Distillery’s oak barrels!

At South Nut, there will be a collection of over a dozen local artisans selling their wares along with the Plant Lady, Boldly Grown Farm (pumpkins and veggies), Sly & Son Sourdough Baker, the Waffle lady (waffles, nut butters and jams)! There will be a canned Food Drive for the Skagit Food Bank, bring some cans to donate and get a discount off your beer! Come raise a glass and celebrate the 11th Anniversary! With breweries, cideries, food trucks, and live music – you’re in for a hoppin’ time!

*Must be 21+ and ready to present ID at the door. No babies, strollers, infants, children, pets/animals will be admitted.

Come raise a glass and celebrate the 11th Anniversary of Anacortes Bier on the Pier presented by Peoples Bank! With breweries, cideries, food trucks, and live music – you’re in for a hoppin’ good time! Experience tastes ranging from spicy and peppery to the citrusy and piney hops of the Pacific Northwest, all with the beautiful views of the Guemes Channel.

After the festival closes, take a stroll through historic downtown Anacortes to find unique shops, live music at multiple venues, and beer and ciders from the festival featured in restaurants. One day in Anacortes just isn’t enough – we hope you make it a weekend! Anacortes has a wide variety of hotels, local inns, and bed and breakfast locations.

Dust off the lederhosen and dirndls because the Chuckanut Oktoberfest celebration is happening at South Nut and P. Nut on Saturday, September 24, 2022, from 12pm to close. This family-friendly fall celebration includes lots of beer, food, games, and contests. Get your arm muscles in shape for the liter holding and hammerschlagen contests. If you aren’t familiar with hammerschlagen it’s a game of skill and strength. Make sure to dress up in your favorite Bavarian gear to enter the costume contest. Contests will happen throughout the day with no early sign-ups needed. Traditionally Oktoberfest happens in the last couple of weeks in September to capitalize on the better September weather as opposed to October, when it historically began in Germany. Activities are planned for the beer gardens at South Nut in Burlington and P. Nut in Portland if the weather holds. Hammerschlagen and costume contests will only happen at South Nut, but there will be plenty to do at P. Nut also.

Beer Garden games like cornhole will be out and at the ready. GrisGris Kitchen will be on hand in Portland to dish up food for the hungry, while Captain’s Cod food truck will be on-site in Burlington at South Nut. Captain’s Cod has been making WAVES since bursting onto the scene with their 100% sustainably caught wild Alaskan Cod. Either way, there will be plenty to eat, and did we mention the beer?

You are guaranteed there will be plenty of Chuckanut’s Fest Bier on hand to drink in liter mugs, just like in Germany. Plus Cuckanut’s other great German beers like Kolsch, Dunkel Lager, Helles Lager, Vienna Lager and the rich Maibock. Chuckanut Oktoberfest is sure to be a very fun gathering for everyone!

Highway to Helles (ABV 5.5% / IBU 18) Our Helles Lager is a tribute to the North Cascades Highway that runs through Anacortes. Highly drinkable and well-balanced, this refreshing session beer is brewed in the traditional German style, slightly malt forward with restrained bitterness from Vanguard & Perle hops, finishing soft and dry.

Pumpkin Ale (ABV 7% / IBU 30) Our 2022 Pumpkin Ale is brewed with biscuit malt along with cinnamon and allspice then local Skagit valley grown pumpkin is roasted in a wood fired oven and added to the bright tank to capture the flavors of Fall.

21st ANNUAL BREWFEST ON THE SKAGIT IS SCHEDULED FOR AUGUST 12th, 2023

The 20th annual BrewFest on the Skagit, the Skagit’s longest-running Craft Brew Festival, is set for Saturday, August 13th, 2022 from 3:00 to 8:30 pm at Edgewater Park along the banks of the Skagit River in Mount Vernon. This year’s BrewFest will feature dozens of local craft brews, three of the region’s most popular bands, leisure games, tie-die courtesy of Tri-Dee Arts, vendors, and local food trucks.

CLICK HERE TO BUY BREWFEST ON THE SKAGIT TICKETS 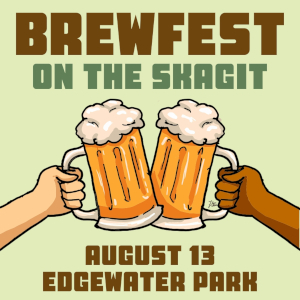 This will be the biggest and best BrewFest on the Skagit ever! Moving the event from Skagit Riverwalk Park to Edgewater Park has given us more room to move and groove.

A special addition to the Festival Leisure Games this year will once again be a cornhole tournament hosted by Upper Left Cornhole! To register yourself or your team for the tournament CLICK HERE or contact Eric at upperleftcornhole@gmail.com for more information. Upper bracket winner: 1st place cash win $250. Lower bracket winners: gift cards. Cornhole players get early 2:00 pm entry. 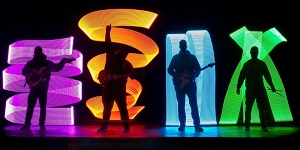 Fanny Alger is proud to be your favorite for-profit-salvation-company.

A 10-piece powerhouse of highly experienced and talented musicians, Baby Cakes takes their audiences on a luxurious joyride through the golden age of American Soul, funk, and R&B. 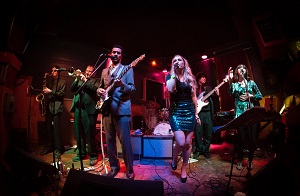 Chuckanut Brewery’s locations will be hosting a slew of events in June and July. If you’re looking for a fun way to spend in the Skagit Valley make your way over to South Nut Tap Room. Events include food trucks (every other Thursday at South Nut), dog fest, crafts market (June 26 and July 17 at South Nut), and oyster pop-ups (at South Nut). At the Artist Market Series during the summer you might find a different selection of jewelry, linens, musical items, art, paper items, food vendors and more. The Artist Market pop-ups run noon-5 pm at South Nut in Skagit and include all local artists selling their creations. Also at South Nut Stella Sopra Italian Food truck stops in every other Thursday 2-7 pm.

Don’t forget to bring your best friend over on July 2 to South Nut and P. Nut for a visit. Join us for a pawfect afternoon of clean pups and clean beers! Both of our locations will have mobile groomers on-site to give your best friend a relaxing spa day while you snag a beer. Discounts on beer, select merchandise, and raffle prizes! Sweet P’s Dog Grooming truck will be on-site noon-5 pm at South Nut and You Dirty Dog at P. Nut, no appointments are necessary. A series of Oyster Pop-Ups will take place all summer long at South Nut too. Dates to be determined but we’ll have fresh oysters and someone to shuck them for you all day. At all of these special events, you’ll be able to sip on your favorite Chuckanut beer and enjoy the activities.

Historically all beers were smoky due to the fires on which they were brewed as well as smoking the malt as it dried during the malting process. Now smoke beers are a rare, special treat and hard to find at that, but Chuckanut Brewery is celebrating these delicious beers with a Smoke Fest!

Chuckanut’s P. Nut Beer Hall in Portland and South Nut Brewery & Tap Room will be hosting Smoke Fest on March 5 in celebration of smoke lagers! Both locations will have three smoke beers on tap: Grodziskie Polish Lager, Rauch Marzen Lager and Rauch Helles Lager. All three beers use a different variation of smoke malts and are unique in color and flavor.

To help our communities in wildfire relief Chuckanut will be donating $1 of each smoke beer sold at both locations on March 5 to Direct Relief an organization that supports firemen and people who have been affected by wildfires. The festivities will include a brewery Open House at South Nut with free brewery tours from 12-4 pm and food pairings ordered from local Skagit Valley Provisions and Skagit Landing Restaurant. At P. Nut in Portland Poblano Pepper Food Truck will be on site as well as Sip & Knit with its first meet up (no charge) for those that want to knit while they sip their beers!

Grodziskie is an old Polish style beer sometimes referred to as “Polish Champagne” that’s brewed with oak smoked wheat malt. It has a subtle smoky flavor and finishes dry as a bone due to the use of the wheat malt. Grodziskie has mineral notes on the nose and great back-end vanilla on the palate. Weighing in at a whopping 3% ABV this beer is extremely crushable. All smoke beers are great food beers and Chuckanut would like you to experience the possibilities with the presence of a Mexican food truck in Portland and two different pairings created by local food purveyors in Skagit Valley. Make sure to visit Chuckanut’s P. Nut Beer Hall and the South Nut Tap Room for some new smoky beer fun on March 5! See you there!

Chuckanut Brewery’s P Nut Beer Hall is located at 920 SE Caruthers St, Portland, OR 97214. Chuckanut Brewery & Tap Room is located in the heart of Skagit Valley at 11937 Higgins Airport Way, Burlington, WA at the Port of Skagit. Chuckanut has won multiple awards from the GABF, World Beer Cup and WA Beer Awards. Both locations welcome guests of all ages!

In celebration of the first Skagit Cider Fest, a Skagit Farm to Pint Roadshow Experience, Farmstrong will be opening their beer garden for a free afterparty concert!

Whatcom County R&B legends BABY CAKES will be blasting 2 hours of incredible live music from the Truck Show stage. With toe-tapping originals and fan-favorite covers, this is one group you do not want to miss!

This concert is for all ages and free to the public for everyone to experience. Jam to the tunes while you enjoy beer and cider (21+) from Farmstrong and food from their Rooted Kitchen!

Baby Cakes will be bringing two hours of funk, rhythm, blues, and rock to the Truck Show stage for a free / all ages / after party for Skagit Cider Fest.

Seating is limited, and outside chairs are welcome! 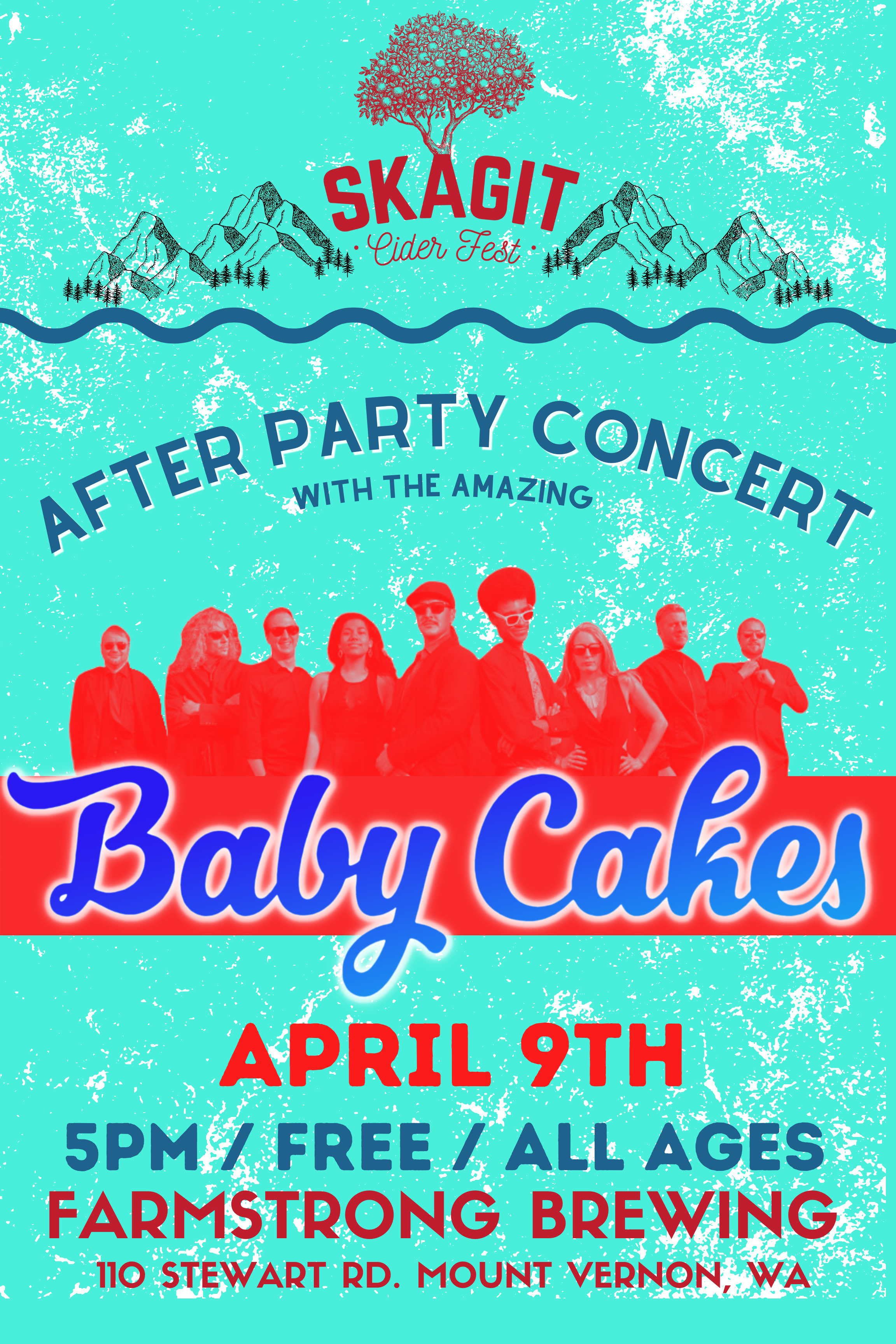 See the splendor of the Skagit Valley Tulip Festival at Tulip Town during the Skagit Farm to Pint Roadshow! Tulip Town has redesigned the fields for an immersive photography experience, updated its retail and cafe,  and a beer & wine garden! Experience Skagit Valley as a Roadshow VIP – purchase a VIP ticket for $85, and you will receive entry to Tulip Town AND a ticket to Skagit Cider Fest! https://skagitfarmtopint.com/wp-content/uploads/2022/02/tulip-town.jpg 960 960 Skagit Farm to Pint https://skagitfarmtopint.com/wp-content/uploads/2016/09/SkgtFARMtoPINT_logo-300x232.png Skagit Farm to Pint2022-02-18 08:47:152022-02-21 15:23:00Tulip Town - A Skagit Farm to Pint Roadshow VIP Experience
Every Wednesday during the Skagit Farm to Pint Roadshow in April, head on over to Farmstrong Brewing. Voted editor’s pick for Best Trivia from Alive Magazine, this trivia night is not to be missed. Teams of 2-6 people play every week for a cumulative score and a total of $300 in cash prizes!
Each week will have a raffle prize from a local sponsor just for playing! Teams that play all four weeks will have a cumulative score resulting in CASH PRIZES for the top 3 teams of the month!
The max team size is six participants and seating is available on a first-come-first-served basis.  There will be four rounds each night with a score potential of 55.